Thank god we found this place.

The thought of spending three nights at Château de la Barben was too much to take in, and even though we slept uneventfully, two more nights in the museum was a frightening notion even for Teko. I’d done research the night before on possible alternatives and luckily found the Garrigae Abbaye Sainte Croix, however we had to see whether the owner could consider our early departure request, and the only time we could meet him was right before breakfast this morning. Without asking why and with no argument at all he said it was no problem, so with the kindness of the owner we were able to shorten our stay without being charged extra.

With that taken care of, the only other hurdle was to book the alternative, and as luck would have it – after dragging our bags down five flights of stairs, under drizzling rain, over cobbled stone, and onto our ill-parked car – the very last room at the Abbey was confirmed just in time. After driving over to the Abbey and confirming they received our reservation, we opted to have breakfast there as well – and given our low expectations from our Château experience and since the Abbey was a former monastery, it’s quite appropriate to describe the breakfast as pure heaven. I can almost see St Michael slaying a dragon on my cappuccino.

Even though it’s forecast to rain in the area most of today, I’m over the moon with our decision – if breakfast was any indication, our time here may just be one of the better ones in this trip. Let’s see how else we can salvage the day in rainy Provence-Alpes-Côte. 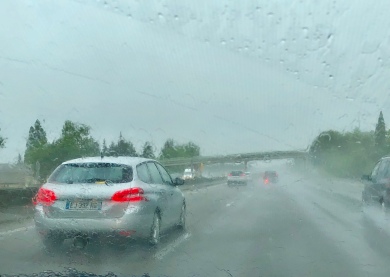