And just like that it was over.
The last time I saw my old DC friends, Chris and Todd, together was way back in February 2010, the first time I went back to the U.S. after moving to The Netherlands. While I’ve seen Chris in Amsterdam a couple of times since, Todd on the other hand I only ever saw on facebook and rarely. So it was a treat to see two of the oldest, most intimate friends I’ve ever known in my adult life come to Amsterdam for a mini-reunion that sadly was so mini it lasted all of three hours.
As it was a school night the only time we could meet was during dinner and I wracked my brain for a place that could at least be as satisfying and intimate as the many dinners they hosted in their house-like flat in Adams Morgan. Being single for the most part I still remember how I was adopted during the high holy days of Thanksgiving, Christmas, and other holidays in between, hanging around when I needed company and sharing our familiar existence as immigrants from a common background. They were as close to family as I could get while I was there and I’m quite lucky and forever grateful for that.
The restaurant I ended up choosing for our get-together was near Central Station, a block away from the Singel and Nieuwezijds Kolk, one of those areas Teko and I would pass by on the few occasions we wandered and got lost in the center. Set in adjacent 400-year old buildings, which was incredible in itself, the restaurant was a sight from the outside with its original wooden interiors, Delft tile work, starched white linen, and silver place settings. Once we all excitedly met up and walked in, we sat down to a historic and historical celebratory feast fit for bourgeois queens. It was really well received.

It was half past nine, eight amuse bouches, sixteen courses, and two bottles of Pouilly-Fuisse later when we finally finished our celebration, heady from all the conversation, catching up, and getting to know you’s for Teko and Todd who had met for only the first time that night. After our friends more than generously took care of the expense, we walked out to the brisk cold, bid our extended goodbyes and promised to meet up again sooner rather than later. More than the food, what makes a dinner memorable is who it’s shared with. Thanks, Chris and Todd, I’ll never forget your bringing over some East Coast coziness and great memories to gray and often-rainy Amsterdam. 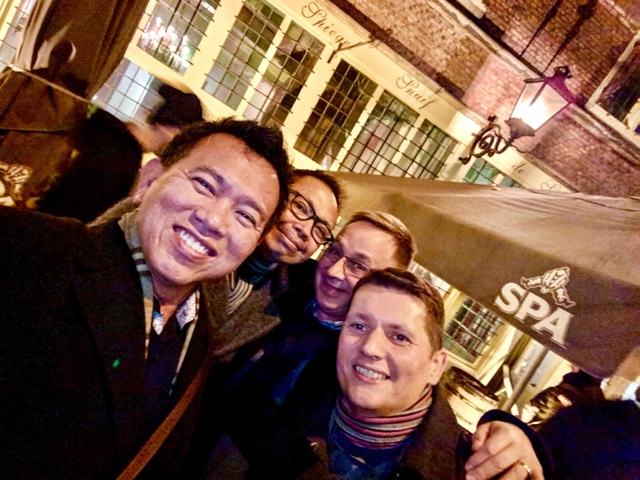