Pretty-looking food isn’t something I go out of my way to look for these days, opting more for substance and comfort, less haute cuisine and something more akin to grandmother’s artisanal, homemade cooking. My Michelin days aren’t behind me yet but I do find myself enjoying a meal more where I don’t have to wonder what wine goes best with whatever main, and whether it’s all right to eat those flowers on my plate. I’m also weary of restaurants that take forever to serve courses and would at this stage likely shy away from anything with five acts or more – three-hour meals are simply overblown, oftentimes overpriced, productions. Tonight however was a treat as we saw our relationship hit the nine-year mark, and after an award-winning performance from Teko who skillfully pretended not to give much weight to the occasion when he picked me up from work earlier, I got to sit down at a restaurant that not only was surprisingly close to our flat but also one where we tried a few times in the past to get in but failed for lack of preparation. Walking in a little after 6 p.m., save for two occupied tables the place was practically empty and still trying to get into the rhythm I thought. Our table was smartly set though with that white linen service I always found appealing, and that started our night on the right note. And so began the dance for the evening that was Bij Qunis. 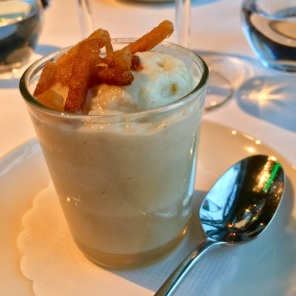 The food turned out increasingly better from the amuse-bouche all the way to dessert, provided with what seemed like a few free courses here and there. The service was attentive enough with even a few friendly smiles here and there, and the space we had allowed enough privacy between us and the next table, though given that the relatively huge dining area was nearly empty – the restaurant is literally set in a restored warehouse-type boiler room – it would have been more intimate to seat us across the room from each other. In any case our corner table by the window was more than satisfactory and it was heartening to have conversations that left us in our own little world for the time we were there.

At the end of the two-hour meal I felt it was a great, not to mention practical, spot to celebrate our odd-numbered years together in style. Especially after all the elaborate plans and daydreaming conversations over dinner about what we would do next year, at least while we still can.