Our little group at work went ‘a team-building and the activity du jour was dinner and bowling. The thought of team-building activities is clearly for me at least something that is uniquely Dutch — never in my working life in the Philippines nor in the U.S. did I ever get to experience such things. Here on the other hand, this would count as the second or third this year, the thought of which reinforces my decision to live where I do. Work can’t only be about work after all.

To me, the word ‘gourmet’ brings up nostalgic thoughts of imported American magazines my sister used to bring home when we still lived in Manila, and amazing meals in expensive, high quality restaurants. It’s taken on a different meaning here – and a disconcerting way of saying it, the ‘t’ at the end is not silent – since the Dutch have taken it to mean absolutely something else. My very first introduction to gourmetten, something akin to Korean barbecue where we cook our own meals right in front of us, was a bit on the disappointing side. Not only did we use equipment that would have been better suited for a child’s play-kitchen, I ended up smelling of smoke all over afterwards. In sharp contrast with Korean barbecues that I went to in Virginia where I was sure to go home satisfied and stomach-bulging, it was the total opposite. Oh well, at least it was free.

The bowling afterwards was fun thankfully, and despite mostly gutter-balling it the last time I went, this time around I was on fire, hitting a handful of strikes and spares here and there. While I did do better than expected, I’m pretty sure it was an absolute fluke and simply jotted it down as semi-beginner’s luck. I can’t imagine suddenly taking up bowling for fitness reasons much less as a serious hobby. Good to leave it as it is and on top. Or maybe it was something in the gourmetten? 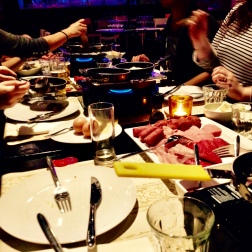