Met up yesterday with my favorite Amsterdam expat couple and finally got to see their large and lovely loveshack in De Baarsjes, where we got caught up over some wine and Portuguese munchies. Still reeling from my previous night’s after-work drinking session, I was nonetheless able to keep up with my hosts while we traded gossip both far and wide.

Moving on to dinner at a newly-opened neighborhood restaurant, we walked in the direction of Westermarkt for the evening’s entertainment — a free classical concert at what turned out to be another successful Grachtenfestival over the Prinsengracht near Anne Frank’s house. All sides of the canal were wall-to-wall packed, and given the mind-boggling weather of late – alternating clear sunny skies and rain showers were becoming the norm these past weeks –  it was a wonder that the concert had the best Summer weather possible that night. It was cold but not extremely, barely any wind, and no rain whatsoever. We were only able to catch the last twenty minutes of the performance but it was enough to feel the energy — especially when they started playing the official Amsterdam anthem. With thanks to my generous hosts, dinner and a show in these parts couldn’t have been any better. 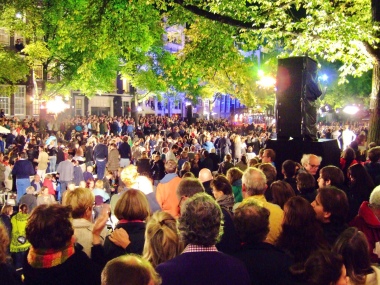