Our Hema store-brand vacuum cleaner, which cost almost nothing and was bought because one of us didn’t have a job at the time, had gone kaput after only a couple of years. Instead of making do with dirt and dust, we opted to get ourselves a new stofzuiger from our local appliance store nearby. Amazingly, it carried Dyson as well. 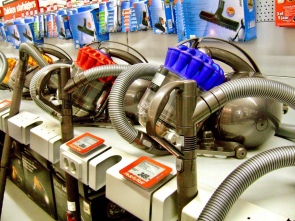 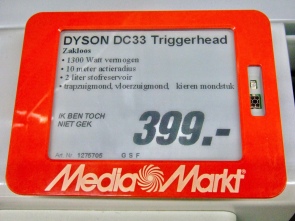 The first time I saw a Dyson was in a magazine and I thought it was a work of art. Even when I was living in a little box of a flat in Washington, DC, I wanted one if only for how good-looking it was and, perhaps, to provide some inspiration while doing something absolutely menial.
Looking at the Dyson in the store, I made a small joke that we should get it – that it would last forever! Unexpectedly, my partner didn’t snap at the idea and, for that moment, we were actually considering getting one. Notwithstanding the price tag, I thought that it would probably outlast both of us and in the end it would be worth it. Never mind that it was 8x what our previous vacuum cost.

After thinking about it for a few minutes, I surprised myself by looking at the other models in the store, and predictably, I was drawn to one in red – I seem to be partial to red-colored stuff lately. I already knew Miele was a good brand, and the retro look was fine with me. The only drawback was that it wasn’t bagless, which meant we’d have to constantly get replacements during its lifetime. But not only was it less than half the cost, it was also an A-brand and, strangely, it was also more powerful. In the end, despite my romanticism with Dyson which would have ended up hidden in a closet for most of the time anyway, practicality won out and we took the Miele home with us that day.
My fascination with looks and image is laughable even to me sometimes, but I think I may finally be growing out of it. Miele, don’t fail me now!