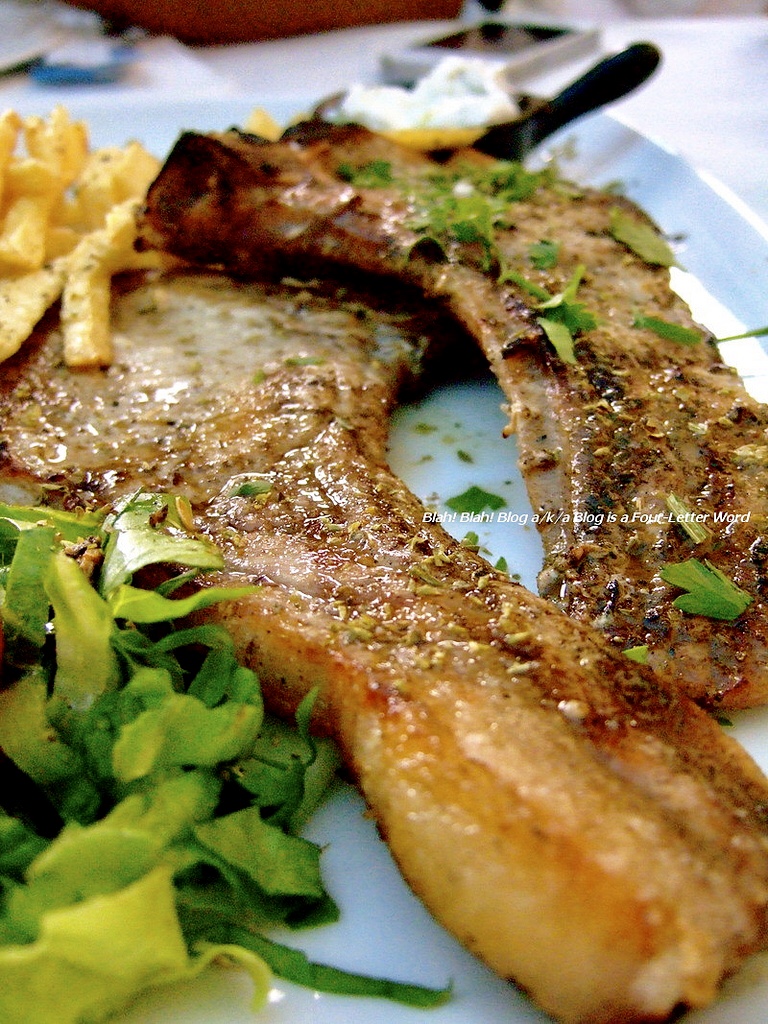 The so-called best restaurant in Fira wasn’t looking the part at all.
It was time for lunch and in the steaming summer heat, we looked for Salt & Pepper along the town’s main road. When we walked in, it was empty – no one there but the owners sitting in a far corner. We sat down and I quickly noticed the kitschy wrought-iron decor. It wasn’t looking so good thus far but at least it was air-conditioned, which was enough to keep us on our seats. It wasn’t long after we walked in though that I saw flashes of Sweeney Todd. Our proprietress had on this weird make-up and a somewhat all-too-eager demeanor. I half-expected her to serve us some mystery meat pie and nonchalantly say ‘Enjoy!’

The first promising sign that we made the right choice was the free home-baked bread alongside a huge slab of feta cheese covered in olive oil and oregano. Now that was a meal in itself. Having home-baked bread is a luxury anywhere, and I felt so bad we could only finish half of the delicious cheese. For the appetizer, we ordered the octopus and couldn’t help but compare it to the one we had in Roka. The main difference – this one was grilled whereas the one from Roka was stewed. They were equally tender but the Roka version wins because of the sweet wine sauce. We ordered the pork steak and pork medallions for entrees, both of which were nicely done, and for a finale the owners gave us an ice cream cake desert mix which looked a bit strange – it was literally cake and ice cream blended together – but which thankfully turned out to be quite tasty.

The proprietress wasn’t Mrs Lovett and neither did we get served any mystery meat. Despite being a bit over-eager, the owners were quite gracious with our questions about their restaurant, the town, and the island. They even walked us out and bid us goodbye. Will be sure to get me some more Salt & Pepper next time around.

One thought on “Salt & Pepper | Santorini”