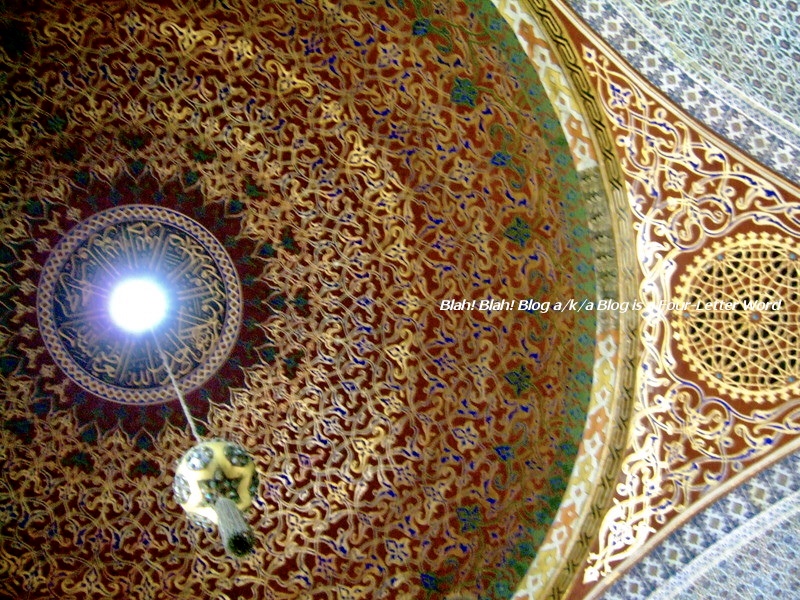 After sleeping in and recovering from yesterday’s marathon daytrip to Ephesus, we finally made it to Topkapi Sarayi a/k/a Topkapi Palace today. This city has an incredible number of palaces, its unbelievable. If only we had the drive to see them all. At the risk of being palaced-out, we just ‘settled’ for the best. Ottoman sultans here we come.

It was easy enough to get there as it was in the same area as Hagia Sophia and the Blue Mosque, but the entire complex was still huge enough that we had to figure out which building was which. One benefit of too many tourists – you can just follow the crowd. Anthony got us a private guide for the hour (boy, was he expensive!) and soon we were on our way. This meant we didn’t have to line up for tickets and could go at our own pace.

Soon enough we found ourselves in front of the Gate of Salutation. It was only used by official dignitaries and called that because visitors would have to salute the Sultan before being allowed in.

One of the first rooms we were taken to was the Grand Vizier’s Imperial Council room. He would sit in the middle of the divan, while the window with the golden grill above him would conceal the Sultan who would be watching the proceedings. The golden orb hanging from the ceiling directly in front of the Sultan’s window represents Earth. The symbolism here is that the Sultan presides over the Earth, and keeps the Grand Vizier in check. All this from our tour guide, Hussein, who as it turns out is also a literature professor, and not hard to believe makes a good living as a private guide.

We are soon out of the building complex through the Gate of Felicity, appropriate as we were quite happy with what we saw. The Ottomans stayed here for 400 years, until they up and moved to the flashier Dolmabahce Palace a bit further north.
Always loved history and how things could have been back then. Being here just gives an even clearer picture of what I only could only read and dream of back then.

Next, lunch fit for a Sultan…